Shrimp-allergic patients found to be allergic to insect protein 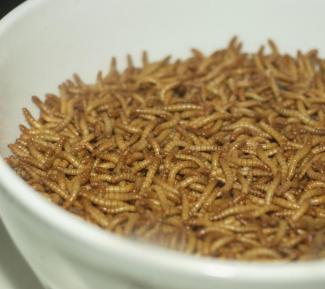 Growing demands for sustainability, ethics and health are major drivers for change in our food production. The need for proteins to feed the growing world population is increasing. On the long run, the relative contribution of certain protein sources traditionally appreciated in the Western world, like meat and milk from farmed animals, is likely to decline. Luckily, many of us have an appetite for new, exotic foods. How about insects, for a change?

The EU Novel Food Regulation requires registration of foods and ingredients that were not consumed to a significant degree within the EU prior to its first publication in May 1997. ‘New’ foods with a well-documented history of safe consumption outside the EU will be exempted from registration as of January 2018, but the criteria for exemption are tough. This means, in order to be lawfully consumed within the EU, insects and their proteins need to be characterized, be investigated for relevant safety aspects and be registered.

What safety aspects are relevant to insects and to insect proteins? To start with, chemical and microbiological contaminants should be kept to a minimum, at acceptable levels. When growing insects, harmful substances should not be produced. This requires a careful choice of insect species, as well as optimization and standardization of growth conditions and substrates. As for any innovation, selection, standardization and optimization can be a challenge. Still, this should be feasible.

Then, it should be considered that many proteins may be recognized as an antigen by a person’s immune system and, depending on the way they become available tot the body, may trigger a reaction. Therefore, allergenic potential is a particularly relevant safety aspect of insects and of insect proteins.

In a collaborative research project from Utrecht University and The Netherlands Organization for Applied Scientific Research (TNO), culminating in the PhD thesis of Henrike Broekman (May 2017), the allergenic potential of mealworms (larvae of Tenebrio molitor) was investigated in a systematic way. Mealworms have a favourable taste and structure, and have potential for large-scale production. They were therefore used as a model organism that has many properties in common with other insects. This thesis is worth reading by those who are looking for new protein sources, as well as by those who are involved in their safety assessment.

In a publication by Broekman et al. (2016) that forms part of the thesis, it was already shown that the majority of shrimp-allergic patients are allergic to mealworm, too. Given the evolutionary relationship between shrimps (crustaceans) and insects, as also reflected in similarity of muscle protein (tropomyosin) within the class of arthropods to which they all belong, this should not come as a surprise. Some patients allergic to house dust mite were found to be allergic to mealworm as well, but this correlation was not very strong.

In the thesis, it is further noted that in some Asian countries where insects are regularly consumed, allergies have been reported, including anaphylactic symptoms. However, it was observed that allergy to crustaceans or to insects appears to be among the less common of known food allergies. Also, in order for shrimps or mealworms to cause an allergic response, much higher intakes are required (gram quantities) than for other known food allergens (in general: milligram quantities).

In one of the studies reported in the thesis, sensitization against mealworms was found in atopic (allergy-prone) subjects. This could indicate that new allergies against mealworms might develop within consumer populations over time. Heat treatment of mealworm protein did not lower allergenic potential, but altered its solubility, which may affect uptake. It was further noted that the food in which an insect protein is present (for instance, a lipophilic versus a hydrophylic food matrix) may modify its uptake and therefore, its allergenicity.

Does this mean that mealworms or any other insects and their proteins cannot be registered as Novel Foods within the EU at all? That is difficult to say. For several reasons, this would be regrettable, though.

Known food allergens with varying potency like peanuts, eggs and milk will continue to be sold. Taking them off the market would be almost unthinkable and would have serious economic repercussions. It would leave consumers with less choice of protein sources, instead of a desirable increase in choice, variation and sustainability. Rather, with known food allergens emphasis is put on protecting people at risk by segregating production lines and products, by scrutinizing and standardizing equipment cleaning procedures and by mandatory labelling. This approach to known food allergens should also be considered for mealworm, for other insects or for products derived from them.

However, one should not rely on allergen labelling, segregation and cleaning procedures alone. Evaluation of the allergenic potential of a novel food protein remains an important aspect of its safety. The thesis by Broekman describes useful tools for such an evaluation, as well as a snapshot of the methods that are currently available, including their limitations.

Introduction of new technologies or products like Novel Foods without any risks is an illusion. Our existing foods are never completely risk-free either. Still, the introduction of numerous novel foods in the EU over the past 20 years has never led to significant safety problems. It appears the case-by-case approach followed by the European Safety Authority (EFSA, NDA Panel) warrants sufficient protection, while offering opportunities for desirable and necessary innovations.

Blocking the market introduction of a new protein in food because it has some allergic potential would close the door to almost any new protein. As many protein sources currently forming part of our diet have some allergic potential, too, this would provide a mere illusion of safety. Rather, a combined approach by assessing allergenic potential of proteins and by identifying, protecting and monitoring populations at risk will help to realize the necessary protein transition, while safeguarding public health.